Could water-saving "shade balls" have a shady side? 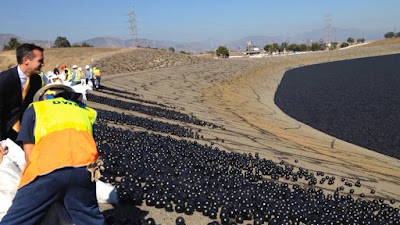 The shade balls getting dispersed into the LA Reservoir
(Credit: Eric Garcetti/CC 2.0)

Three years ago, the drought-stricken city of Los Angeles covered the surface of the LA Basin with 96 million shade-providing floating balls, in order to keep the water beneath from evaporating. Now, an international study suggests that the making of the plastic balls may have have used up more water than they saved.

In order for the shade balls to save as much water as was used in manufacturing them, they would reportedly have to be left on the reservoir for at least two and a half years – and that's only if drought conditions persisted for the entire period.

Additionally, the study points out that the manufacturing process would have had other negative environmental costs, such as the generation of carbon emissions and water pollution.

"We are very good at quick technological fixes, but we often overlook the long-term and secondary impacts of our solutions," says study co-author Dr. Kaveh Madani, from Imperial College London. "This is how the engineering community has been solving problems; solving one problem somewhere and creating a new problem elsewhere … We are not suggesting that shade balls are bad and must not be used. We are just highlighting the fact that the environmental cost of shade balls must be considered together with their benefits."

The findings of the study, which also included scientists from MIT in the US and the University of Twente in the Netherlands, were recently published in the journal Nature Sustainability.

Email ThisBlogThis!Share to TwitterShare to FacebookShare to Pinterest
Labels: Drought Research, News You Can Use, Water Conservation, Water Pollution