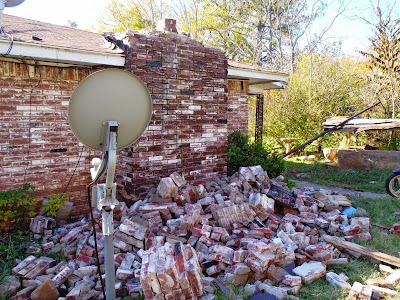 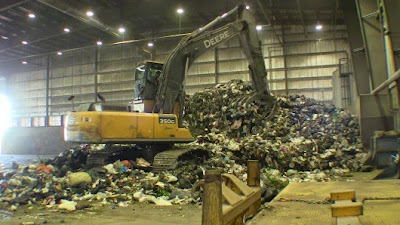 Thanks to its extensive composting and recycling facilities, the city of Edmonton, Canada is already diverting approximately 60 percent of its municipal waste from the landfill. That figure is expected to rise to 90 percent, however, once the city's new Waste-to-Biofuels and Chemicals Facility starts converting garbage (that can't be composted or recycled) into methanol and ethanol. It's the world's first such plant to operate on an industrial scale, and we recently got a guided tour of the place.

The process begins with garbage trucks dumping their loads on the tipping floor at the Integrated Processing and Transfer Facility. The trash is manually and mechanically sorted, with things like appliances being set aside for electronic parts recycling and e-waste disposal, while organic matter heads off to the Composting Facility.

Recyclable materials are already pre-separated by citizens as part of the city's blue bag program. They avoid the garbage stream entirely, going straight to the Materials Recovery Facility for recycling.

Soon, though, high-carbon materials such as wood, fabric and discarded plastic will be getting shredded into Refuse Derived Fuel (RDF), also known as "garbage fluff." It will be transferred to the Waste-to-Biofuels and Chemicals Facility, which is owned and operated by Enerkem Alberta Biofuels.

There, it will be heated in a low-oxygen atmosphere. This will cause its chemical bonds to break (without the material actually burning), releasing their carbon and hydrogen content to form what's known as syngas. This will in turn be cleaned up and converted into chemical products and biofuels – such as methanol and ethanol.

The Waste-to-Biofuels and Chemicals Facility is scheduled to go online in the next several weeks. It is ultimately expected to convert 100,000 tonnes (110,231 tons) of municipal solid waste into 38 million liters (10 million gallons) of biofuels and chemicals annually.

You can see our video tour of the facility below, conducted by the Edmonton Waste Management Centre's Education Programs Co-ordinator, Garry Spotowski. There are also photos of the process in the gallery.

The video can be viewed at: https://www.youtube.com/watch?v=LKKweSAm1Ks

Email ThisBlogThis!Share to TwitterShare to FacebookShare to Pinterest
Labels: Biofuels, News You Can Use
Newer Posts Older Posts Home
Subscribe to: Posts (Atom)