Mechanisms On Why 'Green' Helps in Urban Life

Date: August 2, 2016
Source: University of Oregon
Summary: New research finds that airborne bacterial communities differ from one urban park to the next but those of parking lots are alike -- and differ from those of parks in subtle but potentially important ways. 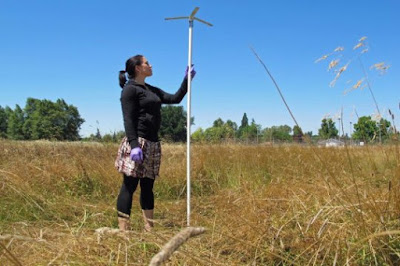 Gwynne Mhuireach, a doctoral student in landscape architecture at the University of Oregon, check out a data-collection site at a park in Eugene, Oregon. Part of her project showed that using inexpensive petri dishes to collect air samples works as well as more expensive methods.
Credit: University of Oregon

New research finds that airborne bacterial communities differ from one urban park to the next but those of parking lots are alike -- and differ from those of parks in subtle but potentially important ways.

At a glance, such findings seem intuitive. Parks often have different vegetation in them, and asphalt-covered parking lots are much the same -- barren asphalt bombarded by solar radiation as well as heavy metals and fuel from motor vehicles.

The importance, according to University of Oregon researchers, is that this pilot study describes not only the differences in microbial communities but also how far from a park the influence may extend.

Recent studies suggest that the composition of the bacterial communities may be important to human health -- and not in the ways you think, says Gwynne Mhuireach, a doctoral student in landscape architecture who led the new study that is online ahead of print in the journal Science of the Total Environment. There is a reason, she says, to believe that healthy air depends not just on the absence of bad things like pollutants, but the presence of good things such as bacteria with which humans have co-evolved.

"We're starting to build larger and more complex cities," Mhuireach said. "I am interested in ways to help maintain people's health and happiness as we do so. Some studies say that as we are building these denser cities we are losing green space. I am looking for mechanisms that explain why vegetation helps people and how we can design for it."

In the study, the researchers simultaneously collected six air samples over an eight-hour period at five parks and five parking lots in Eugene. The locations were free of tall trees that block air movement to constrain microbial differences due to air circulation -- another role vegetation may play. The idea, Mhuireach said, was to first discover whether vegetation was a significant source of microbes for nearby areas.

Subsequent DNA analyses found that Sphingomonas, commonly found in soil and on plant surfaces, accounted for one fourth of bacteria collected. Also abundant were Hymenobacter, Pedobacter, Agrobacterium and Rhodococcus, all soil-associated species. The samples were collected during the harvesting season of the grass-seed industry north of Eugene, when prevailing winds likely blew associated microbes into the sites, researchers noted.

Parking lots tended to be more similar to each other, with a prevalence of Acetobacteraceae, while parks had unique bacterial fingerprints likely reflecting vegetation types in and near each park.

The findings provide evidence of how differences in vegetation in an urban area influence airborne microbial communities at fine spatial scales, said co-author Bart Johnson, a professor of landscape architecture. The study, he said, provides a path to future studies that should help guide landscape design in cities where growing populations are driving denser living spaces.

While the specifics of how plant-associated microbes affect human health, and whether microbes contribute to the well-documented benefits of urban parks for people are unknown, the researchers suggest that "provisioning urban residents with green space within 400 meters (about 1,300 feet) of their homes" would make it more likely that they are exposed to the "park-like microbiome."

"There have been studies that compared the health of children who grow up on farms versus cities," Johnson said. "They've concluded that the lower incidence of allergies in children from farms was related to different microbial exposures, but there has been little work to examine whether there is enough microbial variation at the fine spatial scales of a park, a street or a block to potentially influence the health of children in cities.

"Do children and adults with greater exposure to vegetation receive increased health benefits because of the associated microbes? We don't know, but this study points to some promising new directions of inquiry," he said.

Equally important, the researchers documented that the simple use of petri dishes, a passive data-collection approach, successfully captured airborne microbial samples comparable to the more-expensive use of vacuum-powered equipment at the study sites.

"We just let air out of the sky settle into petri dishes and found that we can use this method in future projects because we found similar composition and diversity of microbes using both methods," Mhuireach said.

Mhuireach's research, Johnson said, creatively combines methodologies from biology, architecture and landscape architecture. It is reminiscent, he said, of Dr. John Snow's mapping of cholera outbreaks in the 1850s. Snow's work provided a scientific understanding of how the disease was spread by waterborne bacteria rather than by "bad vapors," and it coincided with the efforts of landscape architect Frederick Law Olmsted to incorporate nature into urban park designs to improve human well-being.

"Olmtead was dealing with invisible things -- then unknown -- that influenced people's health," Johnson said. "This new research is pointing to a biological mechanism behind Olmstead's ideas."

Mhuireach, who grew up on a farm, said she has been curious about health differences between people who grew up in rural and urban areas. She and her co-authors noted that while overall health has improved with technological progress and lifestyle changes, researchers have found that the shift away from childhood exposures to natural environments is associated with later-life inflammatory response problems such as allergies and asthma.

"As the research advances," she said, "we will be looking at vegetation around homes and neighborhoods where people live to start answering the big questions: Why does green space improve people's well-being? Are there physiological as well as psychological mechanisms? Are there beneficial microbes that we should be exposed to on a daily basis?"


Story Source:
University of Oregon. "Mechanisms on why 'green' helps in urban life: Biological mechanism for health benefits of urban greenery and on the methodology to expand research efforts." ScienceDaily. ScienceDaily, 2 August 2016. http://www.sciencedaily.com/releases/2016/08/160802133747.htm.