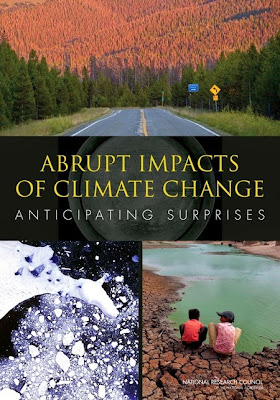 Authors: Committee on Understanding and Monitoring Abrupt Climate Change and Its Impacts; Board on Atmospheric Sciences and Climate; Division on Earth and Life Studies; National Research Council

Description: Climate is changing, forced out of the range of the past million years by levels of carbon dioxide and other greenhouse gases not seen in the Earth's atmosphere for a very, very long time. Lacking action by the world's nations, it is clear that the planet will be warmer, sea level will rise, and patterns of rainfall will change. But the future is also partly uncertain -- there is considerable uncertainty about how we will arrive at that different climate. Will the changes be gradual, allowing natural systems and societal infrastructure to adjust in a timely fashion? Or will some of the changes be more abrupt, crossing some threshold or "tipping point" to change so fast that the time between when a problem is recognized and when action is required shrinks to the point where orderly adaptation is not possible?

Abrupt Impacts of Climate Change is an updated look at the issue of abrupt climate change and its potential impacts. This study differs from previous treatments of abrupt changes by focusing on abrupt climate changes and also abrupt climate impacts that have the potential to severely affect the physical climate system, natural systems, or human systems, often affecting multiple interconnected areas of concern. The primary timescale of concern is years to decades. A key characteristic of these changes is that they can come faster than expected, planned, or budgeted for, forcing more reactive, rather than proactive, modes of behavior.

Abrupt Impacts of Climate Change summarizes the state of our knowledge about potential abrupt changes and abrupt climate impacts and categorizes changes that are already occurring, have a high probability of occurrence, or are unlikely to occur. Because of the substantial risks to society and nature posed by abrupt changes, this report recommends the development of an Abrupt Change Early Warning System that would allow for the prediction and possible mitigation of such changes before their societal impacts are severe. Identifying key vulnerabilities can help guide efforts to increase resiliency and avoid large damages from abrupt change in the climate system, or in abrupt impacts of gradual changes in the climate system, and facilitate more informed decisions on the proper balance between mitigation and adaptation. Although there is still much to learn about abrupt climate change and abrupt climate impacts, to willfully ignore the threat of abrupt change could lead to more costs, loss of life, suffering, and environmental degradation. Abrupt Impacts of Climate Change makes the case that the time is here to be serious about the threat of tipping points so as to better anticipate and prepare ourselves for the inevitable surprises.