Fracking is a highly controversial and divisive issue. Proponents argue that it could be the biggest energy boom since the Arabian oil fields were opened almost 80 years ago, but this comes at a serious cost to the environment. Among the detrimental effects of the process is that the waste water it produces is over five times saltier than seawater, which is, to put it mildly, not good. A research team led by MIT that has found an economical way of removing salt from fracking waste water that promises to not only reduce pollution, but conserve water as well.

Hydraulic fracturing, or fracking uses water pressure to shatter oil shale formations, releasing oil and natural gas from deposits that would otherwise be uneconomical to exploit. One of the major problems with this process is that as the water is pumped through the oil shale, it picks up salt, and by the time it’s pumped back to the surface, it’s extremely salty – in the order of 192,000 parts per million (ppm). In contrast, seawater is only 35,000 ppm. This makes it not only too salty to be disposed of without reprocessing, but it’s also too salty to be reused in fracking.

The MIT research team sought to find the most cost effective means of desalinating fracking water. They found that electrodialysis is not only a promising way of cleaning up fracking waste water, but could also provide oil explorers with a closed-loop system that places less demand on local water supplies. 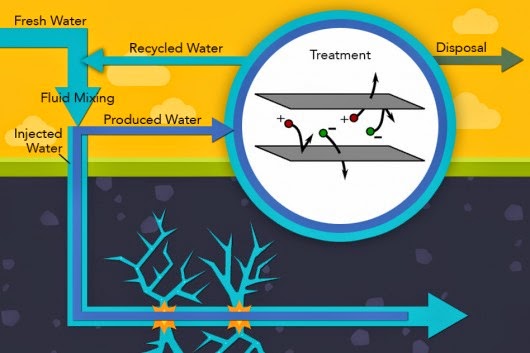 Electrodialysis is not a new technology. It was developed half a century ago and is currently used to desalinate brackish water and seawater, for small-scale drinking water plants, in food processing, greenhouses, hydroponics, and desalinating various chemicals.

In electrodialysis, a series of membranes divide streams of water of different salinity into stacks. An electric current on either side of the stack draws the sodium and chlorine ions of the salt across the membranes, leaving the water behind. The end result is a very salty stream of water, and a relatively pure stream.

According to MIT, electrodialysis has been overlooked as a way of treating fracking waste water until now because the process was thought to only be effective on water that wasn't of such high salinity. However, the team’s research found that electrodialysis is not only practical, but economically viable – not the least because water conducts electricity better as it gets saltier, therefore the electrodialysis process works better.

The team found that the key was to desalinate the water in stages and rather than making the water potable, it only had to be cleaned up enough to be pumped back into a fracking well and used again. This not only has the potential to reduce the costs, but also alleviate pressure on local water supplies and minimize the need for disposal of contaminated water.

In addition, the process described by MIT is extremely flexible, allowing engineers to "dial" the saline output. This is important, because reusing the water will mean finding the most effective level of salinity for fracking, which is a question still to be answered.

According to the team, there’s still a lot of work to be done before the process is practical. In addition to tweaking the electrodialysis design, laboratory work needs to be done on removing oil, gas, and mineral contaminants that may clog the membranes, and new equipment needs to be designed, built, and tested to apply the new technology.
Posted by AAEES at 8:06 AM

Email ThisBlogThis!Share to TwitterShare to FacebookShare to Pinterest
Labels: Fracking, News You Can Use, Wastewater