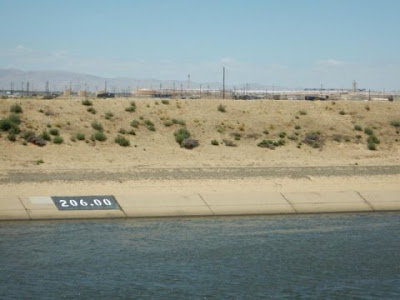 This image shows the California Aqueduct, with the Lost Hills Oil Field in the background.
Credit: Rob Jackson, Stanford University
California's drought-stricken Central Valley harbors three times more groundwater than previously estimated, Stanford scientists have found. Accessing this water in an economically feasible way and safeguarding it from possible contamination from oil and gas activities, however, will be challenging.

"It's not often that you find a 'water windfall,' but we just did," said study co-author Robert Jackson, the Michelle and Kevin Douglas Provostial Professor at Stanford. "There's far more fresh water and usable water than we expected."

The research, published in the journal Proceedings of the National Academy of Sciences the week of June 27, highlights the need to better characterize and protect deep groundwater aquifers not only in California but in other parched regions as well.

"Our findings are relevant to a lot of other places where there are water shortages, including Texas, China and Australia," said study co-author Mary Kang, a postdoctoral associate at Stanford School of Earth, Energy & Environmental Sciences.

A Fresh Look at Groundwater

Previous estimates of groundwater in California are based on data that are decades old and only extend to a maximum depth of 1,000 feet, and often less. Until now, little was known about the amount and quality of water in deeper aquifers.

"Water a thousand feet down used to be too expensive to use," said Jackson, who is also a senior fellow at Stanford Woods Institute for the Environment and at the Precourt Institute for Energy. "Today it's used widely. We need to protect all of our good quality water."

Times are different now. California is in the midst of its fifth year of severe drought, and in 2014 Gov. Jerry Brown declared a drought emergency in the state. To meet its surface water needs, the state is increasingly turning to groundwater supplies.

In the new study, Jackson and Kang used data from 938 oil and gas pools and more than 35,000 oil and gas wells to characterize both shallow and deep groundwater sources in eight California counties.

The researchers concluded that when deeper sources of groundwater are factored in, the amount of usable groundwater in the Central Valley increases to 2,700 cubic kilometers -- or almost triple the state's current estimates.

While this is good news for California, the findings also raise some concerns. First, much of the water is 1,000 to 3,000 feet underground, so pumping it will be more expensive. Without proper studies, tapping these deeper aquifers might also exacerbate the ground subsidence -- the gradual sinking of the land -- that is already happening throughout the Central Valley. Groundwater pumping from shallow aquifers has already caused some regions to drop by tens of feet.

Furthermore, some of the deep aquifer water is also brinier -- higher in salt concentration -- than shallower water, so desalination or other treatment will be required before it can be used for agriculture or for drinking.

Another concern the Stanford scientists uncovered is that oil and gas drilling activities are occurring directly into as much as 30 percent of the sites where the deep groundwater resources are located. For example, in Kern County, where the core of California's oil and gas industry is centered near the city of Bakersfield, one in every six cases of oil and gas activities was occurring directly into freshwater aquifers. For useable water -- water that the U.S. Environmental Protection Agency deems drinkable if treated -- the number was one in three.

Jackson and Kang stress that just because a company has hydraulically fractured or used some other chemical treatment near an aquifer doesn't mean that the water is ruined.

"What we are saying is that no one is monitoring deep aquifers. No one's following them through time to see how and if the water quality is changing," Kang said. "We might need to use this water in a decade, so it's definitely worth protecting."

Email ThisBlogThis!Share to TwitterShare to FacebookShare to Pinterest
Labels: Drought Research, Groundwater, News You Can Use, water