A Biological Solution to Carbon Capture and Recycling?

E. coli bacteria shown to be excellent at CO2 conversion

Date: January 8, 2018
Source: University of Dundee
Summary: Scientists have discovered that E. coli bacteria could hold the key to an efficient method of capturing and storing or recycling carbon dioxide. They have developed a process that enables the E. coli bacterium to act as a very efficient carbon capture device. 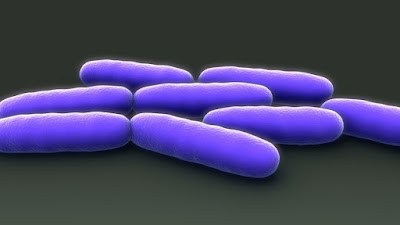 Rendering of bacteria.
Credit: © 7activestudio / Fotolia
Scientists at the University of Dundee have discovered that E. coli bacteria could hold the key to an efficient method of capturing and storing or recycling carbon dioxide.

Cutting carbon dioxide (CO2) emissions to slow down and even reverse global warming has been posited as humankind's greatest challenge. It is a goal that is subject to considerable political and societal hurdles, but it also remains a technological challenge.

New ways of capturing and storing CO2 will be needed. Now, normally harmless gut bacteria have been shown to have the ability to play a crucial role.

Professor Frank Sargent and colleagues at the University of Dundee's School of Life Sciences, working with local industry partners Sasol UK and Ingenza Ltd, have developed a process that enables the E. coli bacterium to act as a very efficient carbon capture device.

"For example, the E. coli bacterium can grow in the complete absence of oxygen. When it does this it makes a special metal-containing enzyme, called 'FHL', which can interconvert gaseous carbon dioxide with liquid formic acid. This could provide an opportunity to capture carbon dioxide into a manageable product that is easily stored, controlled or even used to make other things. The trouble is, the normal conversion process is slow and sometime unreliable.

"What we have done is develop a process that enables the E. coli bacterium to operate as a very efficient biological carbon capture device. When the bacteria containing the FHL enzyme are placed under pressurised carbon dioxide and hydrogen gas mixtures -- up to 10 atmospheres of pressure -- then 100 per cent conversion of the carbon dioxide to formic acid is observed. The reaction happens quickly, over a few hours, and at ambient temperatures.

"This could be an important breakthrough in biotechnology. It should be possible to optimize the system still further and finally develop a 'microbial cell factory' that could be used to mop up carbon dioxide from many different types of industry.

"Not all bacteria are bad. Some might even save the planet."

Not only capturing carbon dioxide but storing or recycling it is a major issue. There are millions of tonnes of CO2 being pumped into the atmosphere every year. For the UK alone, the net emission of CO2 in 2015 was 404 million tonnes. There is a significant question of where can we put it all even if we capture it, with current suggestions including pumping it underground in to empty oil and gas fields.

"The E. coli solution we have found isn't only attractive as a carbon capture technology, it converts it into a liquid that is stable and comparatively easily stored," said Professor Sargent.

"Formic acid also has industrial uses, from a preservative and antibacterial agent in livestock feed, a coagulant in the production of rubber, and, in salt form, a de-icer for airport runways. It could also be potentially recycled into biological processes that produce CO2, forming a virtuous loop."

Email ThisBlogThis!Share to TwitterShare to FacebookShare to Pinterest
Labels: Bacteria, Carbon, E. Coli, News You Can Use