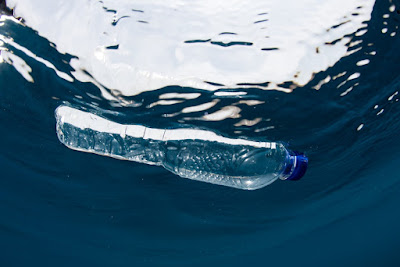 Chemicals that leach out of plastic rubbish were found to impair the growth of bacteria in the ocean responsible for producing a large volume of the oxygen in our atmosphere (Credit: ead72/Depositphotos)
An important new study is raising novel concerns over the effects of plastic pollution in our oceans. For the first time researchers investigated how a common ocean bacteria, responsible for producing over 10 percent of oxygen in the atmosphere, is negatively impaired by chemicals that can leach out of plastic products.

Prochlorococcus is a tiny cyanobacterial genus that was only discovered a little over 30 years ago. This remarkable cyanobacterium is not only the smallest photosynthesizing organism on the planet, but also one of the most abundant. Some estimates suggest there are as much as three octillion Prochlorococcus in the ocean, where they not only help keep the waters healthy, but also produce a substantial volume of the oxygen we breathe.

"These tiny microorganisms are critical to the marine food web, contribute to carbon cycling and are thought to be responsible for up to 10 per cent of the total global oxygen production," says Lisa Moore, from Australia's Macquarie University and co-author on the new study. "So one in every 10 breaths of oxygen you breathe in is thanks to these little guys, yet almost nothing is known about how marine bacteria, such as Prochlorococcus respond to human pollutants."

To fill this substantial gap in scientific knowledge, the researchers took two different strains of the cyanobacteria and in laboratory conditions exposed them to chemicals known to leach out of common plastic products. The results were striking with the chemicals impairing the Prochlorococcus' growth, reducing its ability to photosynthesize, and altering the expression of a large number of its genes.

The study obviously has a number of limitations if one is trying to extrapolate these results to the general effect of plastics in the ocean. The researchers do note that their experiments do not equate to specific concentrations of plastics in the ocean, but instead they're designed to try to better understand what the impact of plastic pollution could be on this vitally important population of microorganisms in our marine systems.

"Our data shows that plastic pollution may have widespread ecosystem impacts beyond the known effects on macro-organisms, such as seabirds and turtles," says lead author on the study, Sasha Tetu. "If we truly want to understand the full impact of plastic pollution in the marine environment and find ways to mitigate it, we need to consider its impact on key microbial groups, including photosynthetic microbes."

While a great deal of activity currently circles the problem of plastics, and microplastics, in our ocean ecosystems, very little is known about what actual damage these pollutants are causing. Further study will be necessary to investigate the effects of these plastics on microorganisms in the actual ocean, but the researchers hypothesize this to potentially be a significant global issue.

The new study notes the nearly two trillion plastic pieces that make up the infamous Great Pacific Garbage Patch cross over an area where the Prochlorococcus cyanobacterium is most abundant. Alongside this, a recent study did reveal that floating plastic rubbish can leach chemicals into ambient seawater in volumes high enough to alter the activity of local microbial populations. So, although this new research was completed in laboratory environments in generally hypothetical scenarios, the problem of plastic chemicals leaching into the ocean is one that certainly needs attention.

The new study was published in the journal Communications Biology.


Story Source: https://newatlas.com/plastic-ocean-pollution-bacteria-photosynthesis-oxygen/59688/
Posted by AAEES at 8:03 AM

Email ThisBlogThis!Share to TwitterShare to FacebookShare to Pinterest
Labels: Air Quality, Marine Biology, News You Can Use, Pollution