Coming soon to a kitchen near you - magnets in your refrigerator. And we're not talking about slapping your kid's artwork inside the fridge next to the milk and butter.

It's the next generation of residential food and drink cooling, and it's powered by magnets. Gone will be the almost century-old unit in your kitchen that uses a heat-transfer process based on liquid refrigerants called vapor compression refrigeration. Condensers and refrigerants will be replaced with magnets and special alloys that get hot and cold based on their proximity to magnetic fields. The technology could also be used for air-conditioning.

Magnetic refrigeration, proponents say, is a rapidly approaching technology that will amount to a revolution in domestic energy use.

"It's the equivalent to a gas-powered car moving to electric - that's the kind of leap we're making in refrigeration," said Ed Vineyard, a senior researcher at the U.S. Department of Energy's Oak Ridge National Laboratory. Vineyard's Building Technologies Program has teamed up with GE to bring magnetic refrigeration to the public in around five years.

The idea behind refrigerators and air conditioners is all the same. In their broadest sense, they are heat pumps - devices that take heat energy from inside your refrigerator box or room and move it outside. Removing this energy makes the temperature go down.

Along with this refrigerator revolution comes a dramatic drop in the amount of energy you need to cool your cucumbers and cantaloupes. ORNL says magnetic refrigeration "is a promising alternative to the vapor compression systems used in today's appliances" that could theoretically drop energy consumption by 25 percent compared to current technology. Those liquid refrigerant chemicals that can be damaging to the environment and hard to recycle at the end of a refrigerator's life are also being replaced by cheaper water-based fluid. 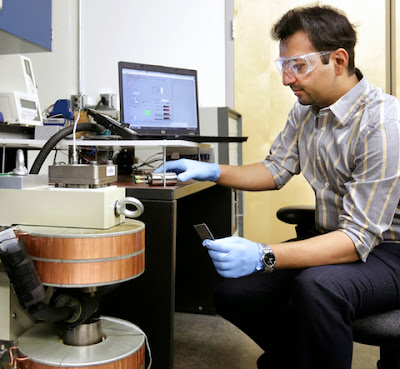 Oak Ridge National Laboratory's Ayyoud Momen works on the team's "breadboard" prototype refrigerator-freezer: a flexible platform used to evaluate material compatibility and to analyze components including the magnet, generators, motor, pump, heat exchangers, plumbing and leakless rotating valve. Courtesy ORNL.
Developers expect the new refrigerators to cost a bit more than vapor compression models, but buyers should see savings through spending less on electricity over the long term. If the technology is adopted broadly, it could mean major electricity savings on the national scale. Besides savings from more efficient refrigerators, magnetic cooling would lower electricity use in heating, ventilation and air-conditioning equipment, which accounts for around 60 percent of the average household's energy use.

Email ThisBlogThis!Share to TwitterShare to FacebookShare to Pinterest
Labels: Energy Use, Magnetic Refrigeration, News You Can Use