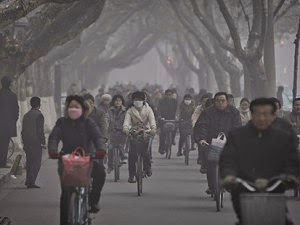 Air pollution regulations over the last decade in Taiyuan, China, have substantially improved the health of people living there, accounting for a greater than 50% reduction in costs associated with loss of life and disability between 2001 and 2010, according to researchers at the Columbia Center for Children's Environmental Health (CCCEH) at the Mailman School of Public Health, the Shanxi Medical University, the Center of Diseases Control and Prevention of Taiyuan Municipality, and Shanghai Fudan University School of Public Health.

The study is the first to document the health and economic benefits of policies to reduce the burden of air pollution in a highly polluted area of China, and provides a model to measure how policies to improve air quality can protect human health. Results appear online in the journal Environment International.

Taiyuan, the capital of Shanxi Province, is a major center in China for energy production and metallurgical industries. To combat air pollution, the Shanxi Provincial Government implemented many new environmental policies and regulations. Between 2000 and 2012, these included mandating the closure of many polluting sources, auditing companies that produced large amounts of toxic and hazardous materials, setting pollutant emissions standards, and promoting energy efficiency and pollution reduction. As a result, concentrations of particulate matter (PM10) declined by more than half, from 196 µg/m3 in 2001 to 89 µg/m3 in 2010, as measured at eight sites throughout the city.

Reductions in particulate matter between 2001 and 2010 were associated with 2,810 fewer premature deaths, 31,810 fewer hospital admissions, 141,457 fewer outpatient visits, 969 fewer ER visits, and 951 fewer cases of bronchitis. The team estimated that there were more than 30,000 fewer DALYs -- disability-adjusted life years, a standard measure of the loss of healthy years -- attributed to air pollution in Taiyuan in 2010 compared to 2001. The cost of premature death due to air pollution decreased by 3.83 billion Yuan, or approximately $621 million.

Particulate matter is released by coal-burning plants and other sources. These small particles can lodge themselves deeply in human lungs, and are associated with heart and lung conditions and premature death.

"Our results suggest that the air quality improvement from 2001 to 2010 resulted in substantial health benefits. In fact, the health and financial impacts of air pollution could potentially be greater than those reported due to our selection of only a few health outcomes that could be quantitatively estimated and translated into monetary values," says lead investigator Deliang Tang, DrPH, associate professor of Environmental Health Sciences at the Mailman School of Public Health.

The study builds on similar research from CCCEH in China, showing improvements in air quality were linked with improved childhood developmental scores.

"Over the last ten years, our research in two Chinese cities have demonstrated that strong government policies to reduce air pollution can result in substantial health benefits for children and adults," says Frederica Perera, PhD, director of the Columbia Center for Children's Environmental Health at the Mailman School of Public Health. "These findings make the argument for stronger and broader regulations in Chinese cities where air pollution remains a serious health problem."

According to the Chinese Ministry of Environmental Protection, only three of 74 cities the government monitors meet minimum air standards. In March, Premier Li Kequiang announced that the country would "declare war against pollution," by reducing particulate matter and closing outdated industrial plants.

Email ThisBlogThis!Share to TwitterShare to FacebookShare to Pinterest
Labels: Air Pollution, News You Can Use