Source: University of Manchester
Summary: Tiny single-cell organisms discovered living underground could help with the problem of nuclear waste disposal, say researchers. Although bacteria with waste-eating properties have been discovered in relatively pristine soils before, this is the first time that microbes that can survive in the very harsh conditions expected in radioactive waste disposal sites have been found. 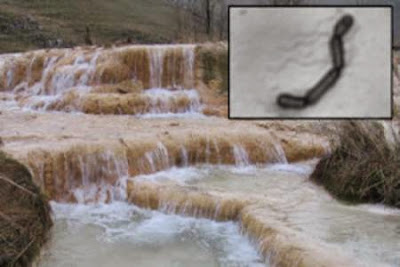 Although bacteria with waste-eating properties have been discovered in relatively pristine soils before, this is the first time that microbes that can survive in the very harsh conditions expected in radioactive waste disposal sites have been found. The findings are published in the ISME (Multidisciplinary Journal of Microbial Ecology) journal.

The disposal of our nuclear waste is very challenging, with very large volumes destined for burial deep underground. The largest volume of radioactive waste, termed 'intermediate level' and comprising of 364,000m3 (enough to fill four Albert Halls), will be encased in concrete prior to disposal into underground vaults. When ground waters eventually reach these waste materials, they will react with the cement and become highly alkaline. This change drives a series of chemical reactions, triggering the breakdown of the various 'cellulose' based materials that are present in these complex wastes.

One such product linked to these activities, isosaccharinic acid (ISA), causes much concern as it can react with a wide range of radionuclides -- unstable and toxic elements that are formed during the production of nuclear power and make up the radioactive component of nuclear waste. If the ISA binds to radionuclides, such as uranium, then the radionuclides will become far more soluble and more likely to flow out of the underground vaults to surface environments, where they could enter drinking water or the food chain. However, the researchers' new findings indicate that microorganisms may prevent this becoming a problem.

Working on soil samples from a highly alkaline industrial site in the Peak District, which is not radioactive but does suffer from severe contamination with highly alkaline lime kiln wastes, they discovered specialist "extremophile" bacteria that thrive under the alkaline conditions expected in cement-based radioactive waste. The organisms are not only superbly adapted to live in the highly alkaline lime wastes, but they can use the ISA as a source of food and energy under conditions that mimic those expected in and around intermediate level radwaste disposal sites. For example, when there is no oxygen (a likely scenario in underground disposal vaults) to help these bacteria "breath" and break down the ISA, these simple single-cell microorganisms are able to switch their metabolism to breathe using other chemicals in the water, such as nitrate or iron.

The fascinating biological processes that they use to support life under such extreme conditions are being studied by the Manchester group, as well as the stabilizing effects of these humble bacteria on radioactive waste. The ultimate aim of this work is to improve our understanding of the safe disposal of radioactive waste underground by studying the unusual diet of these hazardous waste eating microbes. One of the researchers, Professor Jonathan Lloyd, from the University's School of Earth, Atmospheric and Environmental Sciences, said: "We are very interested in these Peak District microorganisms. Given that they must have evolved to thrive at the highly alkaline lime-kiln site in only a few decades, it is highly likely that similar bacteria will behave in the same way and adapt to living off ISA in and around buried cement-based nuclear waste quite quickly.

"Nuclear waste will remain buried deep underground for many thousands of years so there is plenty of time for the bacteria to become adapted. Our next step will be to see what impact they have on radioactive materials. We expect them to help keep radioactive materials fixed underground through their unusual dietary habits, and their ability to naturally degrade ISA."

Story Source: The above story is based on materials provided by University of Manchester.

Email ThisBlogThis!Share to TwitterShare to FacebookShare to Pinterest
Labels: Hazardous Waste, News You Can Use, Nuclear Waste