Fracking and Pollution: Technology-Dependent Emissions of Gas Extraction in the US

Summary: Not all boreholes are the same. Scientists used mobile measurement equipment to analyze gaseous compounds emitted by the extraction of oil and natural gas in the US. For the first time, organic pollutants emitted during a fracking process were measured at a high temporal resolution using a vapor capture system. The highest values measured by this process exceeded typical mean values in urban air by a factor of about one thousand. 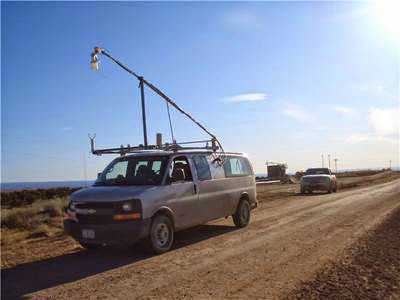 The KIT measurement instrument on board of a minivan directly measures atmospheric emissions on site with a high temporal resolution.
Credit: Photo: F. Geiger/KIT.
Not all boreholes are the same. Scientists of the Karlsruhe Institute of Technology (KIT) used mobile measurement equipment to analyze gaseous compounds emitted by the extraction of oil and natural gas in the USA. For the first time, organic pollutants emitted during a fracking process were measured at a high temporal resolution using a vapor capture system. The highest values measured by this process exceeded typical mean values in urban air by a factor of about one thousand, as was reported in the ACP journal.

Emission of trace gases by oil and gas fields was studied by the KIT researchers in the USA (Utah and Colorado) together with US institutes. Background concentrations and the waste gas plumes of single extraction plants and fracking facilities were analyzed. The air quality measurements of several weeks duration took place under the "Uintah Basin Winter Ozone Study" coordinated by the National Oceanic and Atmospheric Administration (NOAA).

The KIT measurements focused on health-damaging aromatic hydrocarbons in air, such as carcinogenic benzene. Maximum concentrations were determined in the waste gas plumes of boreholes. Some extraction plants emitted up to about a hundred times more benzene than others. The highest values of some milligrams of benzene per cubic meter air were measured downstream of an open fracking facility, where returning drilling fluid is stored in open tanks and basins. Much better results were reached by oil and gas extraction plants and plants with closed production processes. In Germany, benzene concentration at the workplace is subject to strict limits: The Federal Emission Control Ordinance gives an annual benzene limit of five micrograms per cubic meter for the protection of human health, which is smaller than the values now measured at the open fracking facility in the US by a factor of about one thousand. The researchers published the results measured in the journal Atmospheric Chemistry and Physics ACP.

"Characteristic emissions of trace gases are encountered everywhere. These are symptomatic of gas and gas extraction. But the values measured for different technologies differ considerably," Felix Geiger of the Institute of Meteorology and Climate Research (IMK) of KIT explains. He is one of the first authors of the study. By means of closed collection tanks and so-called vapor capture systems, for instance, the gases released during operation can be collected and reduced significantly.

"The gas fields in the sparsely populated areas of North America are a good showcase for estimating the range of impacts of different extraction and fracking technologies," explains Professor Johannes Orphal, Head of IMK. "In the densely populated Germany, framework conditions are much stricter and much more attention is paid to reducing and monitoring emissions."

Fracking is increasingly discussed as a technology to extract fossil resources from unconventional deposits. Hydraulic breaking of suitable shale stone layers opens up the fossil fuels stored there and makes them accessible for economically efficient use. For this purpose, boreholes are drilled into these rock formations. Then, they are subjected to high pressure using large amounts of water and auxiliary materials, such as sand, cement, and chemicals. The oil or gas can flow to the surface through the opened microstructures in the rock. Typically, the return flow of the aqueous fracking liquid with the dissolved oil and gas constituents to the surface lasts several days until the production phase proper of purer oil or natural gas. This return flow is collected and then reused until it finally has to be disposed of. Air pollution mainly depends on the treatment of this return flow at the extraction plant. In this respect, currently practiced fracking technologies differ considerably. For the first time now, the resulting local atmospheric emissions were studied at a high temporary resolution. Based on the results, emissions can be assigned directly to the different plant sections of an extraction plant. For measurement, the newly developed, compact, and highly sensitive instrument, a so-called proton transfer reaction mass spectrometer (PTR-MS), of KIT was installed on board of a minivan and driven closer to the different extraction points, the distances being a few tens of meters. In this way, the waste gas plumes of individual extraction sources and fracking processes were studied in detail.
Posted by AAEES at 7:01 AM

Email ThisBlogThis!Share to TwitterShare to FacebookShare to Pinterest
Labels: Fracking, News You Can Use, Pollution