Summary: Dangerously high levels of air pollutants are being released in Mecca during the hajj, the annual holy pilgrimage in which millions of Muslims on foot and in vehicles converge on the Saudi Arabian city, according to new findings. 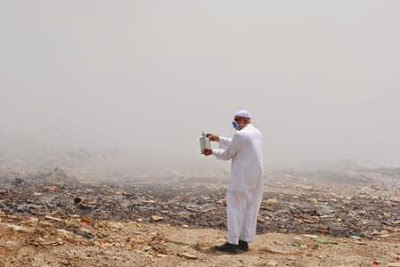 UC Irvine and other researchers are testing air pollution in the Middle East, including in Mecca during the annual hajj, at burning landfills and elsewhere. Dangerously high levels of smog forming contaminants are being released, the scientists have found.
Credit: Image courtesy of Dr. Azhar Siddique

Dangerously high levels of air pollutants are being released in Mecca during the hajj, the annual holy pilgrimage in which millions of Muslims on foot and in vehicles converge on the Saudi Arabian city, according to findings reported today at the American Geophysical Union meeting in San Francisco.

"Hajj is like nothing else on the planet. You have 3 to 4 million people -- a whole good-sized city -- coming into an already existing city," said Isobel Simpson, a UC Irvine research chemist in the Nobel Prize-winning Rowland-Blake atmospheric chemistry laboratory. "The problem is that this intensifies the pollution that already exists. We measured among the highest concentrations our group has ever measured in urban areas -- and we've studied 75 cities around the world in the past two decades."

Scientists from UCI, King Abdulaziz University in Saudi Arabia, the University of Karachi in Pakistan, the New York State Department of Health's Wadsworth Center, and the University at Albany in New York captured and analyzed air samples during the 2012 and 2013 hajjes on roadsides; near massive, air-conditioned tents; and in narrow tunnels that funnel people to the Grand Mosque, the world's largest, in the heart of Mecca.

The worst spot was inside the Al-Masjid Al-Haram tunnel, where pilgrims on foot, hotel workers and security personnel are exposed to fumes from idling vehicles, often for hours. The highest carbon monoxide level -- 57,000 parts per billion -- was recorded in this tunnel during October 2012. That's more than 300 times regional background levels.

Heart attacks are a major concern linked to such exposure: The risk of heart failure hospitalization or death rises sharply as the amount of carbon monoxide in the air escalates, the researchers note in a paper published in the journal Environmental Science & Technology. Headaches, dizziness and nausea have also been associated with inhaling carbon monoxide.

"There's carbon monoxide that increases the risk of heart failure. There's benzene that causes narcosis and leukemia," Simpson said. "But the other way to look at it is that people are not just breathing in benzene or CO, they're breathing in hundreds of components of smog and soot."

The scientists detected a stew of unhealthy chemicals, many connected to serious illnesses by the World Health Organization and others.

Khwaja experienced sooty air pollution firsthand as a child in Karachi, Pakistan, and saw his elderly father return from the hajj with a wracking cough that took weeks to clear. He and fellow researchers braved the tunnels and roads to take air samples and install continuous monitors in Mecca.

"Suffocating," he said of the air quality.

In addition to the high smog-forming measurements, the team in follow-up work found alarming levels of black carbon and fine particulates that sink deep into lungs. Once the hajj was over, concentrations of all contaminants fell but were still comparable to those in other large cities with poor air quality. Just as unhealthy "bad air" days once plagued Greater Los Angeles, research is now showing degraded air in the oil-rich, sunny Arabian Peninsula and elsewhere in the Middle East. Because the number of pilgrims and permanent residents is increasing, the scientists recommend reducing emissions by targeting fossil fuel sources.

Besides vehicle exhaust, other likely culprits include gasoline high in benzene, a lack of vapor locks around gas station fuel nozzles, and older cars with disintegrating brake liners and other parts. Coolants used for air-conditioned tents sleeping up to 40 people also contribute to greenhouse gas buildup. And the dearth of regulations exacerbates these problems.

The researchers said that Saudi officials are aware of the issues and taking steps to address them, such as working to reduce benzene in area gasoline supplies. Directing Mecca pedestrians and vehicles to separate tunnels would be optimal. In addition, clearing the region's air with time-tested technologies used elsewhere in the world could sharply reduce pollution and save lives.

"This is a major public health problem, and the positive news is that some of the answers are very much within reach, like putting rubber seals on nozzles at gas stations to reduce leaks," Simpson said. "It's a simple, doable solution."

Story Source:
The above story is based on materials provided by University of California - Irvine.
Posted by AAEES at 6:01 AM

Email ThisBlogThis!Share to TwitterShare to FacebookShare to Pinterest
Labels: Air Pollution, Air Quality, News You Can Use