Date: January 8, 2015
Source: Dartmouth College
Summary: Fertilizers are known to promote the growth of toxic cyanobacterial blooms in freshwater and oceans worldwide, but a new multi-institution study shows the aquatic microbes themselves can drive nitrogen and phosphorus cycling in a combined one-two punch in lakes. 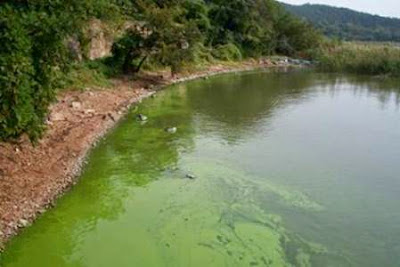 This is a cyanobacterial bloom in China's Lake Taihu.
Credit: Cayelan Carey

The findings suggest cyanobacteria -- sometimes known as pond scum or blue-green algae -- that get a toe-hold in low-to-moderate nutrient lakes can set up positive feedback loops that amplify the effects of pollutants and climate change and make conditions even more favorable for blooms, which threaten water resources and public health worldwide. The findings shed new light on what makes cyanobacteria so successful and may lead to new methods of prevention and control.

The study appears in the journal Ecosphere.

"We usually think of cyanobacteria as responders to human manipulations of watersheds that increase nutrient loading, but our findings show they can also be drivers of nitrogen and phosphorus cycling in lakes," says Dartmouth Professor Kathryn Cottingham, one of the study's lead authors. "This is important because cyanobacteria are on the increase in response to global change -- both warming temperatures and land use -- and may be driving nutrient cycling in more lakes in the future, especially the clear-water, low-nutrient lakes that are so important for drinking water, fisheries and recreation."

Biogeochemical cycling is the natural recycling of nutrients between living organisms and the atmosphere, land and water. The researchers found that cyanobacterial blooms can influence lake nutrient cycling and the ability of a lake to maintain its current conditions by tapping into pools of nitrogen and phosphorus not usually accessible to phytoplankton. The ability of many cyanobacterial organisms to fix dissolved nitrogen gas is a well-known potential source of nitrogen, but some organisms can also access pools of phosphorus in sediments and bottom waters. Both of these nutrients can subsequently be released to the water column via leakage or decomposing organisms, thereby increasing nutrient availability for other phytoplankton and microbes.

Story Source: The above story is based on materials provided by Dartmouth College.
Posted by AAEES at 10:34 AM

Email ThisBlogThis!Share to TwitterShare to FacebookShare to Pinterest
Labels: Fertilizers, News You Can Use, water