Date: April 24, 2017
Source: Cell Press
Summary: Generally speaking, plastic is incredibly resistant to breaking down. That's certainly true of the trillion polyethylene plastic bags that people use each and every year. But researchers may be on track to find a solution to plastic waste. The key is a caterpillar commonly known as a wax worm. 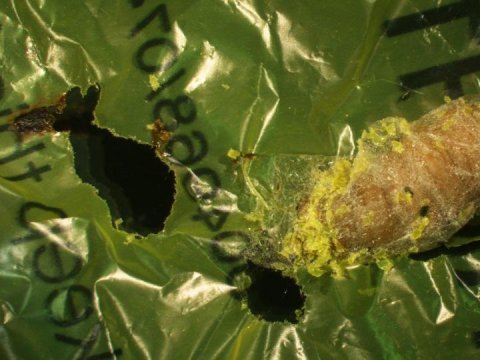 This image shows a wax worm chewing a hole through plastic. Polyethylene debris can be seen attached to the caterpillar.
Credit: Federica Bertocchini, Paolo Bombelli, and Chris Howe

Generally speaking, plastic is incredibly resistant to breaking down. That's certainly true of the trillion polyethylene plastic bags that people use each and every year. But researchers reporting in Current Biology on April 24 may be on track to find a solution to plastic waste. The key is a caterpillar commonly known as a wax worm.

"We have found that the larva of a common insect, Galleria mellonella, is able to biodegrade one of the toughest, most resilient, and most used plastics: polyethylene," says Federica Bertocchini of the Institute of Biomedicine and Biotechnology of Cantabria in Spain. A previous study (doi: 10.1021/es504038a) has shown that Plodia interpunctella wax worms, the larvae of dian mealmoths, can also digest plastic.

Bertocchini and her colleagues made the discovery quite by accident, after noticing that plastic bags containing wax worms quickly became riddled with holes. Further study showed that the worms can do damage to a plastic bag in less than an hour.

After 12 hours, all that munching of plastic leads to an obvious reduction in plastic mass. The researchers showed that the wax worms were not only ingesting the plastic, they were also chemically transforming the polyethylene into ethylene glycol. This is suspected to be the case in Plodia interpunctella as well.

Although wax worms wouldn't normally eat plastic, the researchers suspect that their ability is a byproduct of their natural habits. Wax moths lay their eggs inside beehives. The worms hatch and grow on beeswax, which is composed of a highly diverse mixture of lipid compounds. The researchers say the molecular details of wax biodegradation require further investigation, but it's likely that digesting beeswax and polyethylene involves breaking down similar types of chemical bonds.

"Wax is a polymer, a sort of 'natural plastic,' and has a chemical structure not dissimilar to polyethylene," Bertocchini says.

As the molecular details of the process become known, the researchers say it could be used to devise a biotechnological solution to managing polyethylene waste. They'll continue to explore the process in search of such a strategy.

"We are planning to implement this finding into a viable way to get rid of plastic waste, working towards a solution to save our oceans, rivers, and all the environment from the unavoidable consequences of plastic accumulation," Bertocchini says. "However," she adds, "we should not feel justified to dump polyethylene deliberately in our environment just because we now know how to bio-degrade it."

Email ThisBlogThis!Share to TwitterShare to FacebookShare to Pinterest
Labels: Insects, Nature, News You Can Use, Recycling, Waste