Water Efficiency in Rural Areas is Getting Worse, Even as it Improves in Urban Centers

Date: May 18, 2017
Source: North Carolina State University
Summary: A nationwide analysis of water use over the past 30 years finds that there is a disconnect between rural and urban areas, with most urban areas becoming more water efficient and most rural areas becoming less and less efficient over time. 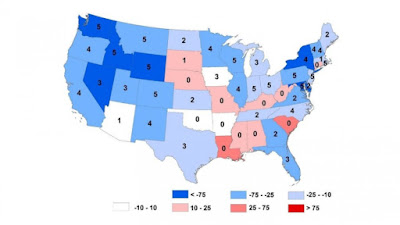 This map shows spatio-temporal patterns of water-use efficiency (per-capita consumption) across the continental United States. Colors indicate the change in per-capita consumption, in gallons per day per person, computed as the difference between 2010 and 1985 estimates. The numbers shown in each state indicate the number of 5-year periods each state reduced its per-capita withdrawals from 1985 to 2010.
Credit: Sankar Arumugam

"Understanding water use is becoming increasingly important, given that climate change is likely to have a profound impact on the availability of water supplies," says Sankar Arumugam, lead author of a paper on the work. "This research helps us identify those areas that need the most help, and highlights the types of action that may be best suited to helping those areas." Arumugam is a University Faculty Scholar and professor of civil, construction and environmental engineering at North Carolina State University.

The new paper stems from a National Science Foundation-funded, interuniversity research project which focuses on understanding how water sustainability in the United States has changed over the past 30 years as a result of climate change and population growth.

For this paper, researchers evaluated water use data at the state and county level for the 48 contiguous states. Specifically, the researchers looked at water-use efficiency, measured as per capita consumption, in 5-year increments, from 1985 to 2010.

"This is the first systematic evaluation of water use across the continental U.S.," Arumugam says. "And we found that some states -- including Washington, Pennsylvania and Wyoming -- were becoming more efficient every five years. Meanwhile, other states -- such as South Carolina, Oklahoma and Mississippi -- have gotten worse every five years."

"In other words, as we are facing a more uncertain future regarding water resources, rural counties are being left behind," Arumugam says.

The researchers found that investment in new water-efficiency technologies, and retrofitting existing water infrastructure, are big reasons for the improvement in urban areas.

"Rural counties appear to lack the resources, the political will, or both, to keep pace," Arumugam says.

Another important finding is that technologies and strategies focused on efficiency -- as opposed to large-scale projects, such as building new reservoirs -- have been extremely successful. These efforts have allowed urban areas to avoid sharp increases in water use, even as their populations have grown significantly.

"There may be a role for huge infrastructure projects at some point, but these findings underscore the value of focusing on efficiency measures -- and the need to pursue those measures in rural counties," Arumugam says.

Story Source: North Carolina State University. "Water efficiency in rural areas is getting worse, even as it improves in urban centers." ScienceDaily. ScienceDaily, 18 May 2017. http://www.sciencedaily.com/releases/2017/05/170518140246.htm