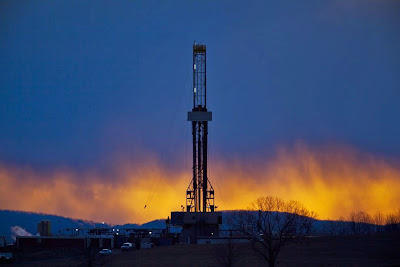 Dusk falls at a hydraulic fracturing site in northeastern Pennsylvania. New technologies aim to reduce fracking's impact on land, water, and air.
It may seem strange to hear the words "fracking" and "environmentally friendly" in the same sentence.

After all, hydraulic fracturing, or fracking, in which high-pressure chemically treated water is used to crack rock formations and release trapped oil and gas, is a dirty term to many environmentalists. Critics decry the practice for consuming vast amounts of fresh water, creating toxic liquid waste, and adding to the atmosphere's greenhouse gas burden, mostly because of increased risk of leaks of the potent heat-trapping gas, methane. (See related quiz, "What You Don't Know About Natural Gas.")

James Hill, chief executive of the Calgary, Alberta-based energy services firm GasFrac, is one of a handful of technology pioneers determined to change that. Hill's company has introduced a new fracking method that uses no water at all. Instead, GasFrac uses a gel made from propane—a hydrocarbon that's already naturally present underground—and a combination of what it says are relatively benign chemicals, such as magnesium oxide and ferric sulfate, a chemical used in water treatment plants. Over the past few years, GasFrac has used the process 2,500 times at 700 wells in Canada and the United States.

GasFrac is one of a growing number of companies, including giant GE and the oil services firm Halliburton, that are pioneering technological improvements to mitigate some of the environmental downsides to the process that has spurred a North American energy boom. (See Interactive, "Breaking Fuel From Rock.") Besides GasFrac's water-free method, other companies are working on ways to use recycled frack water or non-potable brine in fracking. Some are working on replacing harsh chemicals used in the process with more benign mixtures, or to cleanse water that's been used in fracking. Other innovators are looking to replace diesel-powered drilling equipment with engines or motors powered by natural gas or solar energy, and to find ways to find and seal leaks that allow methane, a potent greenhouse gas, to escape.

Such efforts have even won cautious support from some environmental activists, who've decided that it may be more realistic to mitigate the consequences of fracking than to fight its use.

"Natural gas is a potential energy bounty for the country, and development is probably inevitable," said Ben Ratner, a project manager for the nonprofit Environmental Defense Fund. (See related "Interactive: Breaking Fuel From Rock" and "The Great Shale Gas Rush.") "That's why we're investing our energy into doing everything, from science to policy to working with companies, to maximize the potential climate advantage that gas has over coal, and minimize the risk to public health and the environment. We think natural gas can be an exit ramp from coal, but we have to do it right." (See related, "U.S. Energy-Related Carbon Emissions Fall to an 18-Year Low," and Natural Gas Nation: EIA Sees U.S. Future Shaped by Fracking.")

Here are a few of the efforts to make fracking greener:

Water-Free Fracking: GasFrac's fracking system, which uses a gelled fluid containing propane, has other advantages besides eliminating the need for water, according to Hill. Because the gel retains sand better than water, it's possible to get the same results with one-eighth the liquid and to pump at a slower rate. Because GasFrac says the amount of hydrocarbon in the gel is comparable to what's in the ground, the fluid can simply merge into the flow being extracted from the ground, eliminating the need to drain contaminated wastewater and haul it away in trucks for disposal, usually at deep-well injection sites. "We present a much smaller footprint," he said. (See related, "Fracking Waste Wells Linked to Ohio Earthquakes.")

Using Recycled Water or Brine: While fracking typically uses freshwater, industry researchers have worked to perfect friction-reducing additives that would allow operators to use recycled "gray" water or brine pumped from underground. Halliburton's UniStim, which went on the market about a year ago, can create a highly viscous fluid from any quality of water, according to Stephen Ingram, the company's technology manager for North America. In northeastern Canada, one producer has tapped into a deep subsurface saline water aquifer for a portion of its supplies for hydraulic fracturing.

Eliminating Diesel Fumes: The diesel-powered equipment used in drilling and pumping wells can be a worrisome source of harmful pollutants such as particulates, as well as carbon emissions that contribute to global warming. And diesel fuel is expensive. Last year, Apache, a Houston-based oil and gas operator, announced it would become the first company to power an entire fracking job with engines using natural gas. In addition to reducing emissions, the company cut its fuel costs by 40 percent. Halliburton has introduced another innovation, the SandCastle vertical storage silo for the sand used in fracking, which is powered by solar panels. The company also has developed natural-gas-powered pump trucks, which Ingram said can reduce diesel consumption on a site by 60 to 70 percent, resulting in "a sizable reduction in both emissions and cost."

Treating Wastewater: At hydraulic fracturing sites, the amount of wastewater typically far exceeds the amount of oil produced. The fluid that returns to the surface through the well bore is not only the chemically treated frack water, but water from the rock formation that can contains brines, metals, and radionuclides. (See related, "Forcing Gas Out of Rock With Water.") That wastewater must be captured and stored on site, and then often is shipped long distances to deep well injection underground storage facilities. There have been few treatment options. But Halliburton has developed the CleanWave treatment system, which uses positively charged ions and bubbles to remove particles from the water at the fracking site. Last September, GE and its partner Memsys also tested a new on-site treatment system that allows the water to be reused without being diluted with freshwater, by employing a desalination process called membrane distillation. (See related Quiz: What You Don't Know About Water and Energy.

Plugging Methane Leaks: A major fracking concern has been whether companies are allowing a significant amount of natural gas to escape, because methane—the main component of natural gas—is a potent greenhouse gas, 34 times stronger than carbon dioxide (CO2). A recent study concluded U.S. methane emissions are likely 50 percent higher than official government estimates. (See related, "Methane Emissions Far Worse Than U.S. Estimates.") New U.S. Environmental Protection Agency regulations that go into effect next year will require that all U.S. oil and gas sites have equipment designed to cut a wide range of pollutants, a step that the agency expects will cut methane. (See related, "Air Pollution From Fracked Wells Will Be Regulated Under New U.S. Rules.")

Methane emissions from onshore oil and natural gas production could be reduced by 40 percent by 2018, at a cost that's the equivalent of just one cent per thousand cubic feet of natural gas produced, concludes a just-released study, conducted by Fairfax, Va.-based consulting firm ICF International for the Environmental Defense Fund. EDF's Ratner said that inspectors equipped with infrared cameras can spot leaks at fracking sites, which can then be plugged. "The cameras cost about $80,000 to $100,000 apiece," he noted. "But that can pay for itself, because the more leaks you fix, the more gas you have to sell." (See related blog post: "Simple Fixes Could Plug Methane Leaks From Energy Industry, Study Finds.")

Another improvement that can reduce methane emissions: Replacing conventional pressure-monitoring pneumatic controllers, which are driven by gas pressure and vent gas when they operate. A U.S.-wide move to lower-bleed designs could reduce emissions by 35 billion cubic feet annually. And switching out conventional chemical injection pumps used in the fracking process, which are powered by gas pressure from the wells, and replacing them with solar-powered pumps, operators could eliminate an 5.9 billion cubic feet of methane emissions annually, the EDF report concludes.

Some solutions do not require advanced technology. A study released Wednesday by the Boston-based Clean Air Task Force suggests that almost all of the methane leaks from the oil and gas infrastructure could be reduced at relatively little expense, often by simply tightening bolts or replacing worn seals.

A number of greener fracking technologies already are being implemented, according to industry officials. But one obstacle is economic. The newer, more environmentally friendly technologies generally cost more than the legacy equipment they would replace. Extracting natural gas with water-free fracking, for example, could cost 25 percent more than conventional fracking, according to David Burnett, a professor of petroleum engineering at Texas A&M University who heads that school's Environmentally Friendly Drilling Systems Program. He said that switching fracking equipment from diesel to natural gas is the innovation that's catching on most rapidly, because it provides a clear economic benefit as well as helping to lower carbon emissions. With the rising cost of renting fracking rigs, companies are eager to find improvements that will reduce their costs, he said.

Green fracking is "the same as with any industry—if you come out with a game-changing technology, you can get in the market first and ride that," Burnett said. (See related, "Can Natural Gas Bring Back U.S. Factory Jobs?")

But Halliburton's Ingram said that innovations such as chemical treatments to make brine usable will drop in price as the technology is perfected. "Eventually it will become the lower-cost chemistry," he said.

A more difficult hurdle might be overcoming what Ingram calls "sociopolitical constraints" around the country. One major issue that reduces incentives to invest in green fracking innovations: the generally low price of freshwater. (See related, "Water Demand for Energy to Double by 2035.")

Source: This story is part of a special series that explores energy issues. For more, visit The Great Energy Challenge
Posted by AAEES at 1:16 PM

Email ThisBlogThis!Share to TwitterShare to FacebookShare to Pinterest
Labels: Fracking, Natural Gas, News You Can Use