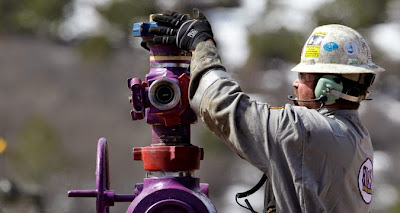 The methane strategy is the latest step in a series of White House actions aimed at addressing climate change without legislation from Congress. Individually, most of the steps will not be enough to drastically reduce the United States' contribution to global warming. But the Obama administration hopes that collectively they will build political support for more substantive domestic actions while signaling to other countries that the United States is serious about tackling global warming.

In a 2009 United Nations climate change accord, President Obama pledged that by 2020 the United States would lower its greenhouse gas emissions 17 percent below 2005 levels. "This methane strategy is one component, one set of actions to get there," Dan Utech, the president's special assistant for energy and climate change, said on Friday in a phone call with reporters.

Environmental advocates have long urged the Obama administration to target methane emissions. Most of the planet-warming greenhouse gas pollution in the United States comes from carbon dioxide, which is produced by burning coal, oil and natural gas. Methane accounts for just 9 percent of the nation's greenhouse gas pollution — but the gas is over 20 times more potent than carbon dioxide, so even small amounts of it can have a big impact on future global warming.

And methane emissions are projected to increase in the United States, as the nation enjoys a boom in oil and natural gas production, thanks to breakthroughs in hydraulic fracturing technology. A study published in the journal Science last month found that methane is leaking from oil and natural gas drilling sites and pipelines at rates 50 percent higher than previously thought. As he works to tackle climate change, Mr. Obama has generally supported the natural gas production boom, since natural gas, when burned for electricity, produces just half the greenhouse gas pollution of coal-fired electricity.

Environmental groups like the Sierra Club have campaigned against the boom in natural gas production, warning that it could lead to dangerous levels of methane pollution, undercutting the climate benefits of gas. The oil and gas industry has resisted pushes to regulate methane leaks from production, saying it could slow that down.

A White House official said on Friday that this spring, the Environmental Protection Agency would assess several potentially significant sources of methane and other emissions from the oil and gas sector, and that by this fall the agency "will determine how best to pursue further methane reductions from these sources." If the E.P.A. decides to develop additional regulations, it would complete them by the end of 2016 — just before Mr. Obama leaves office.

Among the steps the administration announced on Friday to address methane pollution:

Howard J. Feldman, director of regulatory and scientific affairs for the American Petroleum Institute, which lobbies for oil and gas companies, said he hoped the steps would not lead to new regulations on his industry. "We think regulation is not necessary at this time," he said. "People are using a lot more natural gas in the country, and that's reducing greenhouse gas."

Since cattle flatulence and manure are a significant source of methane, farmers have long been worried that a federal methane control strategy could place a burden on them. But Andrew Walmsley, director of congressional relations for the American Farm Bureau Federation, said that his group was pleased that, for now, the administration's proposals to reduce methane from cattle were voluntary.

"All indications are that it's voluntary," he said, "but we do see increased potential for scrutiny for us down the line, which would cause concern."

Source: New York Times. A version of this article appears in print on March 29, 2014, on page A12 of the New York edition with the headline: White House Unveils Plans to Cut Methane Emissions.
Posted by AAEES at 1:25 PM

Email ThisBlogThis!Share to TwitterShare to FacebookShare to Pinterest
Labels: Greenhouse Gas Emission, Natural Gas, News You Can Use