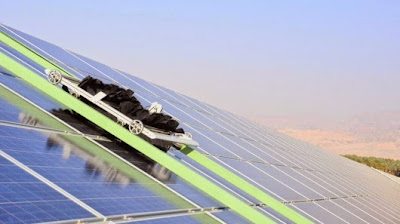 The dusty desert environments where many solar plants are located can make their photovoltaic arrays dirty and reduce their effectiveness. Cleaning the panels can be a time-consuming and expensive process. An Israeli solar plant is now said to be the first to have fully-automated cleaning in place.

Ketura Sun was the first commercial solar field in Israel. It spans 8 hectares (20 acres) and produces 9 million kilowatt-hours of electricity each year. Located in the Negev desert, the plant is jointly owned by Siemens AG and Arava Power, which is Israel's leading solar developer.

Due to the expense of cleaning the Ketura Sun panels manually, the process was only carried out nine times a year, meaning the plant was mostly operating in a state of dusty inefficiency. Each cleaning process took five days and meant that efficiency was further reduced as crews carried out the work. Damage to the sensitive equipment was also a risk.

Now, the panels at Ketura Sun are being cleaned nightly by a fleet of almost 100 water-free, energy-independent robots. The Ecoppia E4 robots are mounted on a frame that moves laterally along the panels and the robots themselves move up and down the panels. They use a rotating brush made up of soft microfiber in conjunction with air blowers to remove what Ecoppia says is 99 percent of dust build-up.

This approach means that no water is required, unlike the Heliotex solar cleaning system, avoiding the need to pipe a potentially limited resource to the devices. The robots also use their own solar panels and energy-recovery systems to generate the power they need to operate. As such, they are completely self-contained and independent.

Ecoppia says that dust accumulation on solar panels (or "soiling") can reduce the energy output of panels by up to 35 percent. By removing up to 99 percent of dust on a nightly basis, its E4 robots can help to keep the panels at near-optimum performance constantly.

The video below shows the Ecoppia E4 robots in action..
https://www.youtube.com/watch?feature=player_embedded&v=kBjS95-ALTc

Email ThisBlogThis!Share to TwitterShare to FacebookShare to Pinterest
Labels: Environment, News You Can Use, Solar Energy